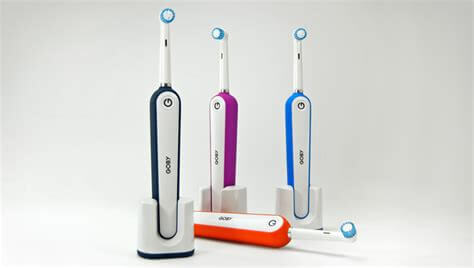 We cannot take the buying decision off your hands, but we can show you certain differences between the different types of electric toothbrushes.

On this basis you can at least select which type you prefer. Each of these electric toothbrushes has its advantages and disadvantages. Let’s go through them one by one and make a comparison. 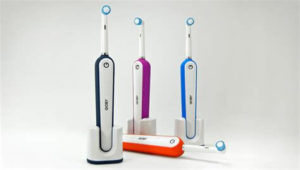 What are the reasons for using an electric toothbrush?

Another advantage over manual toothbrushes is the gentle treatment of the gums during the brushing process. No great effort is required to clean your teeth thoroughly with the electric toothbrush and to prevent gingivitis. Therefore, it is also suitable for older people and children who find the effort involved in manual toothbrushing difficult.

What types are there?

The brush head is driven and vibrated by a small electric motor integrated in the handle. It would be wrong to say that the brush head rotates, as is often claimed, because in fact it vibrates back and forth, similar to movements with the manual toothbrush. Depending on the model, the toothbrush operates at approximately 3,000 to 8,000 revolutions per minute.

The oscillating electric toothbrush is equipped with a relatively small brush head, which makes it possible to reach even inaccessible corners of the teeth. However, you should be careful not to apply too much pressure, as this could damage the tooth or the gums. 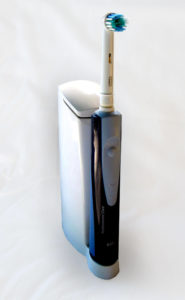 As the name suggests, this electric toothbrush works with rotating movements. Several small brushes are used and treat teeth like gums gently. However, we do not deal with this issue as rotating toothbrushes and brush heads can usually only be obtained from abroad.

It is probably the most common electric toothbrush at the moment. In contrast to the oscillating brush head, the brush head is not driven by an electric motor, but the brush head is vibrated by about 30 – 40,000 sound waves per minute. The sound waves make it easier to remove plaque and discolouration. The risk of injury to the gums is also lower with the sonic toothbrush. However, the vibrations caused by the sound waves in the mouth require a short adaptation period.

The price of the sonic toothbrush is slightly higher than that of the oscillating one.

It is used less often and is often confused with the sonic toothbrush. It is highly recommended for people with physical difficulties or disabilities. The selection of ultrasonic toothbrushes on the market is rather clear, there are not so many models.

1.6 million vibrations per minute provide an extremely high frequency, which can be unpleasant for some from the feeling. It is also important to know that you are not allowed to use normal toothpaste here, but a special toothpaste. It is applied directly to the teeth before brushing. With a brush or a swab, the bubbles in the cream burst and clean teeth and gums very gently.

For comparison, here is also a video:

, especially for older people and children.