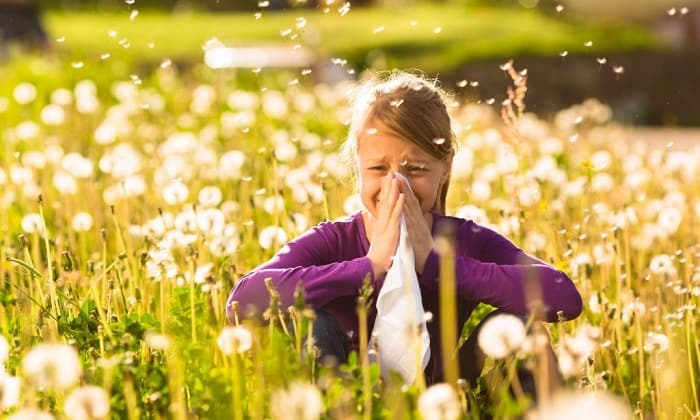 Pollen allergy: What to do? This article answers this question and shows what allergies exist, including the seasons. Then we show countermeasures.

When it begins to bloom again in spring, many people start sneezing and having a cold every year, accompanied by swollen eyes and headaches. The reason: a pollen allergy.

However, patients do not have to put up with them: In this short text you will find health tips to help reduce the suffering with pollen.

What is a pollen allergy?

Pollen is one of the most common causes of allergies in the United States. Pollen is a very fine powder produced by trees, flowers, grasses and weeds to fertilize other plants of the same species. Many people have a negative immune response when inhaling pollen. The immune system normally defends the body against harmful invaders such as viruses and bacteria to ward off disease. In pollen allergy sufferers, the immune system mistakenly recognizes the harmless pollen as a dangerous intruder and begins to produce chemicals against the pollen.

Some people have pollen allergies all year round, others only at certain times of the year. For example, people who are sensitive to birch pollen have increased symptoms in spring when the birch flowers. Likewise, those with ragweed allergies are the most affected in late spring and early autumn. Over 8 percent of adults has hay fever experience, according to the American Academy of Allergy, asthma and immunology. It is unlikely that the allergy will disappear as soon as it develops. However, the symptoms can be treated with medication and allergy vaccinations. Certain lifestyle changes can also help alleviate the symptoms associated with pollen allergies.

What types of pollen allergies are there?

There are hundreds of plant species that release pollen into the air and cause allergic reactions. Here are some of the most common culprits.

Birch pollen is one of the most common airborne allergens in spring. As the trees bloom, they release tiny pollen grains scattered by the wind. A single birch can produce up to five million pollen grains, with many distances of up to 100 meters to the family tree.

Like birches, oaks send pollen into the air in spring. While oak pollen is considered slightly allergenic compared to the pollen of other trees, it remains in the air longer. This can lead to severe allergic reactions in some pollen allergy sufferers.

Grass is the main cause of pollen allergies in the summer months. It causes some of the most severe and hard-to-treat symptoms. However, the American Academy of Allergy, Asthma and Immunology reports that allergy shots and allergy tablets can be highly effective in relieving symptoms of grass pollen allergies.

Ragweed plants are the main cause of allergies among weed pollen. They are the most active between late spring and autumn. Depending on the location, however, the ragweed can begin to spread its pollen as early as the last week of July and continue until mid-October. Its wind-driven pollen can cover hundreds of kilometres and survive a mild winter.

What are the symptoms of pollen allergy?

The most common symptoms of pollen allergy include:

The effect of household remedies on allergies is controversial. What is a clear advantage, however, is that in most cases some supplies are part of one’s own budget, so that the procurement effort remains low. Moreover, the occurrence of side effects is also no problem.

A popular household remedy that can help against undesirable reactions to pollen is yoghurt: This has the simple reason that the bacterial cultures contained in it have an allergenic effect.

Another solution can be a simple nasal rinse made of water mixed with common salt, which is pulled up the nose and has a kind of rinsing function. If you prefer something to drink, you can have nettle tea – the nettle contains histamine blocking substances, which can contribute to an improvement in your health feeling.

If you do not want to be alone in the fight against allergy, you can turn to a doctor or alternative practitioner. They use various methods to help patients: for example, hyposensitization, which desensitizes the patient after a certain period by injecting the allergy trigger under the skin. A similar method is sublingual immunotherapy, in which a pollen solution, as the name suggests, is dripped under the tongue. Acupuncture or hypnosis can also be used if you wish to avoid medication.
The classic way – medication

Drugs that promise recovery and health for pollen allergy sufferers are available in various forms. Antihistamines are recommended due to their rapid effect with the small disadvantage of fatigue. Glucocorticoid solutions and homeopathic remedies such as Sabadilla can also provide relief. The best thing to do here is to ask the doctor.