Breast cancer chemo nutrition: What to eat? What can you eat if you have cancer, what do you have to take into account? This article provides some ideas.

Researchers know that a healthy diet reduces the risk of cancer. Certainly, other factors (heredity, unhealthy lifestyle) also play a role in this dreaded disease. However, those who eat a healthy diet can significantly reduce their risk of illness. The World Health Organization (WHO) is certain that one in three cancer patients is due to an imbalance between (wrong) food and (lack of) exercise. 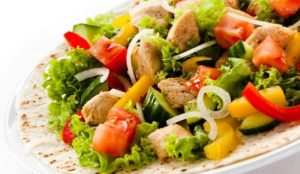 Being overweight plays a big role. It is important to have a nutrition that is adapted to actual consumption. Radical diets are useless. Everyone should take care of a low-fat diet. It seems certain that vegetarians are less likely to develop cancer. Who loves meat, can enjoy it nevertheless in moderation, if much fruit and vegetables stand on the further food plan. But be careful with raw meat: some studies show that it could promote rectal and colon cancer. Alcohol should be consumed in moderation. This reduces the rikiso for cancer of the liver, breast cancer, larynx, oesophagus and oral cavity, among others. Even salted or highly salt- and smoke-conserved foods can promote stomach cancer. Too hot drinks or food seem to be the cause of cancer in the oral cavity, esophagus and throat.

What to eat in breast cancer?

If you or someone you care about has recently been diagnosed with breast cancer, there will be questions. This can include: What should I eat?

Remember these four nutritional tips in any cancer therapy:

Get enough calories. Forget the calculator – the best way to know if you eat enough calories for energy is to weigh yourself once or twice a week. If your weight is losing weight week after week, talk to a nutritionist to make a plan. Remember to eat regularly throughout the day. Small meals usually work well five to six times a day.

Concentrate on nutrients and get the most nutrients per calorie. Choose food from the food groups – things like fruits, vegetables, cereals, beans, nuts, seeds, meat/eggs and dairy products. A balanced diet helps ensure that you get the nutrients you need to keep your body strong.

If you have no nutritional side effects of your cancer treatment that limit your ability to eat and/or digest food, you can maintain a generally healthy diet:

Fruit and vegetables: Five or more portions per day

Whole grains are unprocessed foods rich in complex carbohydrates, fiber, phytochemicals, vitamins and minerals. A study by researchers at Soochow University in Suzhou, China, found that high fiber uptake can have a positive effect by altering the hormonal effect of breast cancer and other hormone-dependent cancers.

Some studies, including a study by researchers at the Karolinska Institute in Stockholm, Sweden, have shown that the type of fat you consume can cause breast cancer. Limit your intake of saturated fats such as beef, lamb, organ meat, butter, cream, etc. and reduce your intake of foods containing trans fats, also known as hydrogenated oils. Increase your intake of fatty fish such as salmon, tuna, herring and sardines to two to three times a week.

For good protein sources, increase your intake of poultry, fish and legumes such as beans and lentils. Minimize the intake of pickled, pickled and smoked food. Soy in moderate quantities, i.e. one to two portions per day of whole soy foods such as tofu, edamame and soy milk, may also be contained. Studies, among others at the American Institute for Cancer Research, show that animals metabolize soy differently than humans. Soy is not only safe in moderate amounts, but also contains isoflavones, a phytonutrient with cancer-inhibiting properties. Up to three servings of whole soy foods per day do not increase a breast cancer survivor’s risk of recurring or dying.

alcohol consumption is a known risk factor for breast cancer. A large observational study of 105,986 women suggested that drinking three glasses of wine or more per week throughout life increased a woman’s breast cancer risk by a small but significant percentage. The study found a 15 percent higher risk of breast cancer when women drank an average of three to six drinks a week compared to women who did not drink. Try to avoid taking alcoholic beverages as much as possible.

Researchers have discovered that some foods can help with cancer prevention. Celery is at the forefront. The onion already has a good reputation as a herbal medicine. It protects against almost all cancers. Tomatoes slow down the growth of cancer cells with their dye lycopene. Citrus fruits are particularly effective. They act directly on the cells and fight numerous types of cancer. Wholemeal bread is also recommended. The ballast materials contained dampen bile acid, which can lead to intestine cancer. Two or three slices of wholemeal bread per day should be included. Rosemary seems to protect against liver cancer and garlic can be used to prevent almost all types of cancer. The old wisdom of eating an apple every day is still valid. The dietary fibres contained in apples seem to prevent bowel cancer. Fish should be on the menu at least three times a week.

Omega-3 fatty acids reduce the production of inflammatory molecules. Cancer often cannot develop in the first place. Green tea is also very effective. It contains tannins that protect against breast, intestinal, skin, lung and prostate cancer. Good news: Little sweethearts don’t have to do without chocolate. However, the cocoa content should be at least 70 percent. The body is then supplied with polyphenols, which seem to fight the cancer cells effectively. Olive oil is also a very good anti-cancer agent. You should take a spoonful of this precious oil every day. Cabbage types are not only cancer-preventing, but also anti-inflammatory. But please crush well when eating, so that all important substances are released. Curcuma contained in curry has preventive properties for breast cancer and soy contains a protein that acts on hormones and protects against cancer.

Nevertheless, cancer can still occur despite a healthy diet. Nobody should feel guilty because they may not have eaten celery (due to an allergy or because they don’t like the vegetables), but they are a meat fan. There are many reasons for the development of cancer. It is important to feel good in his skin and in his life.